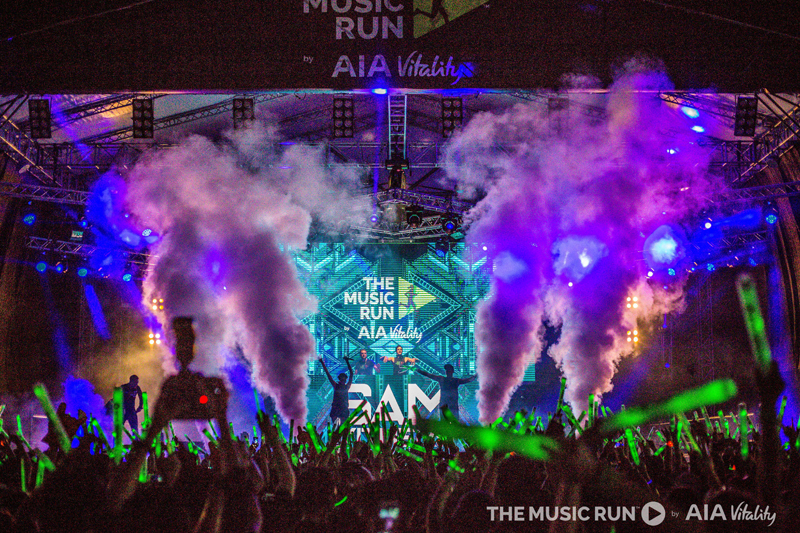 OVER 11,000 PARTICIPANTS JOINED INAUGURAL ‘NIGHT RUN’ AT THE MUSIC RUNTM BY AIA VITALITY BANGKOK, 27 February, 2017 – An infectious and energetic blend of music filled the atmosphere at Bangkok’s iconic Suan Luang Rama 9 Park as over 11,000 participants, aka Music Runners™ ran, dance and partied to the first ever night run edition of The Music Run™ by AIA Vitality. The event, hailed in other countries as the Ultimate 5k Running and Music Festival, returned to Bangkok bigger and bolder this year in its third year running.

A phenomenal and futuristic run, The Music Run™ is an award-winning event that offers a unique total music immersion experience and has been making waves all over the world, including multiple sold-out events in Asia in 2016 and new tour dates announced in India, Europe and South Africa this year. Powered by JOOX, Thailand’s leading digital music streaming app, Music Runners™ voted for the top 25 songs played across 150 concert-quality speakers along the 5KM running course.

The Music Run™ by AIA Vitality started on a high-note at the Music Village with a pre-party featuring local alternate rock band Getsunova, who rocked the crowd with upbeat renditions of their latest hits. Energy levels were high as Official Fitness Partner, Virgin Active led a mass warm up before the night run.

The 5KM run course is divided into 5 Music Zones, where Music Runners™ get to soak up the great evening atmosphere and unique elements in each zone.

In the first kilometre, Music Runners™ met legendary rock stars and rocked their socks off with giant guitars, amplifiers and keyboards in the AIA Vitality Rock Zone. In the second kilometre they were rewarded with free drinks (B-ern, B-Tox and B-loc) handed out by angels in the illuminated Slin Drink Pop Zone.

In the AirAsia Old School Zone in the third kilometre, Music Runners™ took a trip down memory lane running along to their favourite old school tunes. The fourth kilometre was the GS Battery Hip Hop Zone, where Music Runners™ snapped pictures along a live graffiti wall, and ran through a GS Tough glow-in-the-dark obstacle challenge.

This year, in remembrance of the beloved late King Bhumibol Adulyadej, the organisers of the event also included a special sixth zone – a ‘Tribute Zone’ which featured live performances of the late king’s compositions by ‘The Great Music Orchestra’ conducted by Lieutenant Junior Grade Bunsong Taesoongnoen.
Music Runners™ were also treated to endless music and fitness-inspired entertainment in the Music Village courtesy of event sponsors and partners. Presenting Sponsor AIA Vitality hosted fun and challenging activity stations which included a boxing ring, a bike station, a jumping jive obstacle challenge as well as photo booths for all Music Runners™ to enjoy.

To cap off the event was the ultimate music festival that kept the energy high with dancers, laser lights, and Australian radio house DJ Sam Withers, who was a big hit in last year’s after-run concert, wowed audiences once more with a stunning closing performance.

Mr. Tan Hak Leh, Chief Executive Officer of AIA Thailand, said, “We are delighted to once again present The Music Run™ in Bangkok for the first ever night run. Apart from being a very special platform to promote positive health attitudes and the spirit of community, we also see great value in aligning with The Music Run™ to build on customer trust in AIA Vitality in Thailand. AIA’s Vitality program is a testament to the company’s commitment to play a large and positive part in the joyful and healthy lives of AIA customers. We are dedicated to committing to being a force of inspirational change in people’s lives. The event was extremely enjoyable, and AIA wishes to thank all of our Music Runners™.”

Pranai Phornprapha, Managing Director of Exceed Sports and Entertainment, promoter of the event said, “We are delighted that The Music Run™ by AIA Vitality Bangkok enjoyed great participation levels and huge amounts of enthusiasm from everyone who joined in the fun. We want to thank all the participants for their contribution to the Chaipattana Foundation. Thanks also to our very dedicated sponsors for making this event possible, and for enabling The Music Run™ to get bigger and better every year.”

or The Music Run TM Facebook page at http://www.facebook.com/TheMusicRunTH.